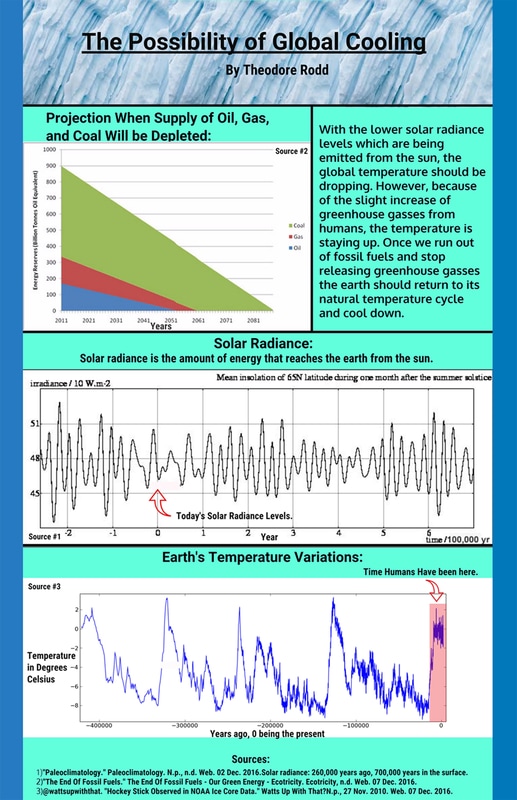 Explain your understanding of the relationship between combusting fossil fuels, the greenhouse effect and climate change in a manner that would be appropriate for teaching a middle school student.

The general idea behind how fossil fuels cause what is known as the greenhouse effect or climate change is when gasses are released into the air from humans, making a thicker atmosphere. The different fossil fuels we burn are oil natural gas coal etc., which release the greenhouse gases. The earth is surrounded by an atmosphere comprised mostly of nitrogen and oxygen. What this atmosphere does is both reflect and hold in the radiation or heat which is released by the sun. This results in the temperature rising when there are too much greenhouse gasses in the air and lowering when there is not enough. However if there is a very sudden increase in greenhouse gasses from something like a volcano it actually causes the temperature to cool for a small period.


What is the role of scientists and engineers in society? In what ways is life as we know it better (or worse) because of their work either in basic scientific research or the development of implementable technologies?

Well to start off technology makes life far easier, however with the creation of these new ideas comes with it for the first the possibility of destroying the world. Via atomic bomb, drilling into the mantle, manmade bio weapons etc. Yes we have found many ways to kill ourselves however production is a machine that will never stop and if it makes life easier is it really that bad. One day the earth is going to end naturally anyway so we need to find these new kinds of technology which can keep the human race alive in such a disaster. And generally most new technologies are created from weapons. The atomic bomb which killed thousand brought on a whole new realm of options.


In your opinion, what is the role of innovation in the development of new cleaner energy
production/consumption technologies in reducing the amount of carbon dioxide and other greenhouse gases released into the environment?

Okay so innovation does not mean to get some old ideas and tweak them slightly, it means finding other ideas that completely solve the problem not branching off of the same bad idea over and over again. For example instead of just trying to find a car that is better at filtering out the amount of greenhouse gases it emits. Try to make a car that runs solely off of solar power. You want to look at the problem all over again as if no other tries have been made on it and create a new idea to solve it.


How significant is the climate change related problem you identified? What are its root causes? What, if anything, can be done to mitigate the severity of the problem or are the outcomes inevitable?

Well, to start off my problem is a huge deal, I mean what would be worse the whole world feeling like the Bahamas or half of the world uninhabitable because of year round subzero temperatures and ice. We are running out of fossil fuels and if we do not find new solutions to heat our homes when the global temperatures begin to drop humanity will freeze having to abandon our cities and flee to the equator. Yes global warming may flood the coast, but a new ice age would bury our cities in ice.
The cause of this threat is completely natural and it has been happening for all the history of the earth. You might think well life survived before why not again. Well yes that is true however if this happens again without humanity being prepared it will result in kicking us back into the ice age. This issue is not inevitable because there is a slight possibility of causing the runaway greenhouse effect, which is when the planet heats uncontrollably. However we would be hard pressed to do this since we are going to run out soon and all the forces of nature are fighting against us trying to return earth to its natural temperature cycle which right now should be cold. And also global warming fanatics point out how the northern ice caps are melting which is true, however, they fail to point out how the South Pole is freezing at about the same rate. It could be something to do with less fossil fuel down there.
Things that could keep this from happening are the continued use of greenhouse gasses, however we will run out one day and the earth should return to its normal cycle and return with glaciers and such. Therefore, humans causing global warming is actually a good thing because currently the earth should be going back to ice age temperature levels however it is staying up because of us. The majority of human history has been spent in the time of the earth on its warming trend. So if we stop releasing these greenhouse gasses we could actually be in very big trouble.


1st)
Hockey Stick Effect.
https://wattsupwiththat.com/2009/12/09/hockey-stick-observed-in-noaa-ice-core-data/
"Hockey Stick Observed in NOAA Ice Core Data." Watts Up With That? N.p., 27 Nov. 2010. Web. 12 Jan. 2017.
I chose this as my top source because it is one of the most viewed journals out there for when it comes to global temperatures. Also it is a secondary source which pulls its information from NOAA one of the most reliable weather services. This article is secondary because they got the information from NOAA. Although this is a chart so it is still the original piece, it was just copied and pasted.

2nd)
Fuel Reserves
https://www.ecotricity.co.uk/our-green-energy/energy-independence/the-end-of-fossil-fuels
"The End Of Fossil Fuels." The End Of Fossil Fuels - Our Green Energy - Ecotricity. N.p., n.d. Web. 12 Jan. 2017.
I find this one reliable because it is the website for an actual organization over in England which focuses on finding green energy for the world. However it is biased because they have a goal in mind of having all green energy. This is a primary source because the company collected the information themselves.
​
3rd)
Energy from the Sun.
http://ircamera.as.arizona.edu/NatSci102/NatSci102/lectures/climate.htm
"Paleoclimatology." Paleoclimatology. N.p., n.d. Web. 02 Dec. 2016.
Solar radiance: 260,000 years ago, 700,000 years in the surface.
This is my least reliable source however it does not seem to be biased very much. This source is tertiary because it comes from a source which got the info from a magazine which got it from the original people. However it is a chart so it does not really matter it was not changed.

Chemistry of food and Cooking:

In what way(s) is cooking like doing science and in what way(s) are they different? How are a cook and a food scientist similar or different?
When you cook there are many different chemical reactions going on, not all chemical reactions are the green bubbly fluid you imagine coming out of a flask. You could say that it is similar to science because you are measuring and doing different ratios, however, this is not cooking. Real cooking is finding whatever you can at your house and throwing it together into something amazing without the help of a book. When I cook I only ever use my senses using a recipe takes away from the creativity and quality of your food.
The differences between a cook and a food scientist is that a cook can actually make food and create while a food scientist finds a recipe that is already there and then run tests on it seeing what is there on the particulate level. Food scientist makes food very consistently since they are using a recipe, while a cook can make the same meal but it will be different every time since there is no recipe. They are similar because they both make food.


How can we measure the qualities and desirability of a finished recipe both quantitatively and qualitatively in order to determine the success of our recipe experimentation?
We can measure a recipe quantitatively by seeing how much there is, so you know how much you need to make to feed everybody. And you can measure it qualitatively by putting the food through a survey of taste testing to see how many people like the flavor of the food. You can also look at the food on the particulate level and try to get the right level of viscosity, how sour it is, how sweet, how spicy, how buttery. These are all things you can look at and change depending on what people want.